The Lighthouse in Acre is a high-quality photograph. Will compliment any interior or photography collection. The certificate of authenticity is supplied. 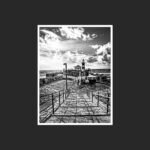 The city occupies an important location, sitting in a natural harbor at Haifa Bay’s extremity on the coast of the Mediterranean’s Levantine Sea.

Aside from coastal trading, it was also an important waypoint on the region’s coastal road and the road cutting inland along the Jezreel Valley. During the Early Bronze Age, the first settlement was abandoned after a few centuries, but a large town was established during the Middle Bronze Age. Continuously inhabited since then, it is among the oldest continuously-inhabited settlements on Earth. However, it has been subject to conquest and destruction several times and survived as little more than a large village for centuries at a time.

Acre was an important city during the Crusades and was the site of several battles. It was the last city held by the Crusaders in the Levant before it was captured in 1291.

The Lighthouse is located in the old seaport of the city with very picturesque surroundings.

The photograph is made in a very high resolution, which provides exceptional prints.

There are no reviews yet.

Only logged in customers who have purchased this product may leave a review.